Twin Peaks is a chain of restaurants founded in 2005 with over 90 locations across the United States of America.

You may notice the logo & graphics highlight the chain's rustic, alpine brand, as does their "cabin-style" architecture which invites you to "experience the lodge mantality": 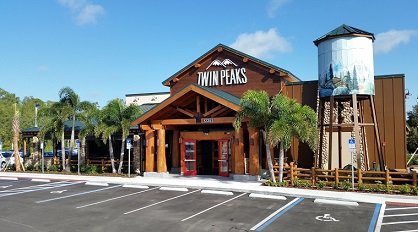 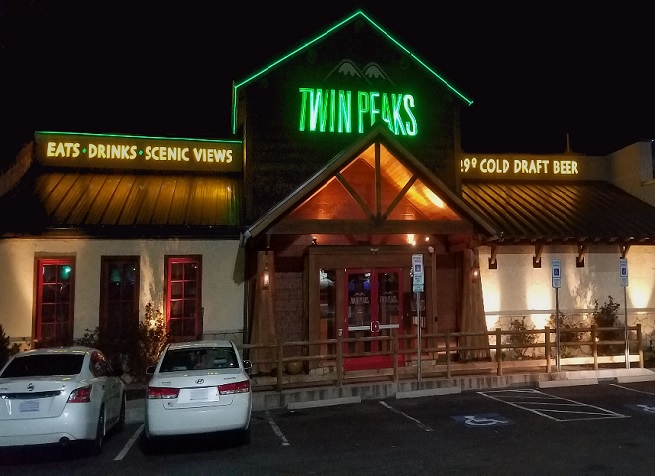 Pay special attention to words that stand out and seem to have special meaning - these words may be symbolic and figurative.

Much of the language & many photographs on Twin Peaks' MySpace.com page reflects this hidden meaning: 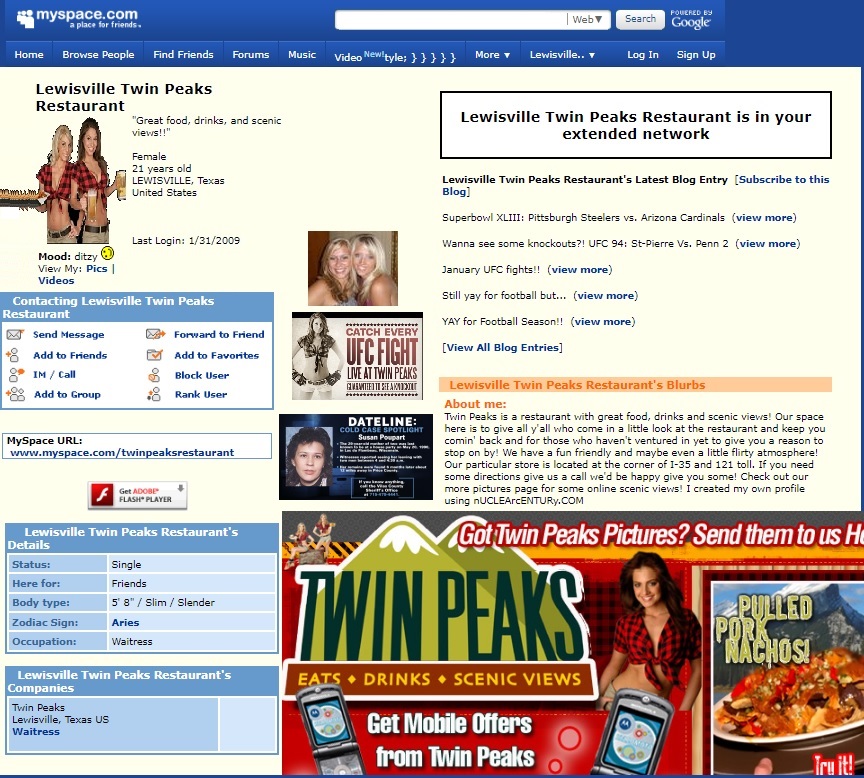 Pardon the question, but could there be more than just "good, clean mountain-living" going on here?

Let's take a look inside a "Twin Peaks"-- 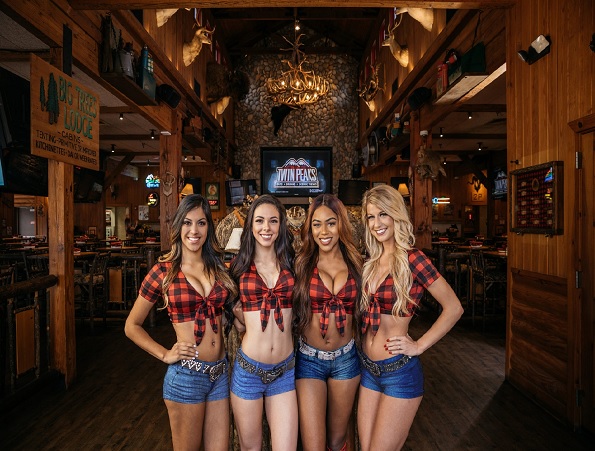 Could the "scenic views" these entities promise refer to more than barren, rocky landscapes?

What you may not realize is these two "peaks" each have a second, hidden meaning, not apparent unless you look "through the veil."

In addition to the chain's mountainous aesthetic, each triangular peak subliminally resembles a woman's breast.

Starting to get it? Hang on, we're just getting deeper.....

So let's allow that may be the coded meaning behind "Twin Peaks."

What about the originator of this type of "sports bar" restaurant?

Hooters, according to urbandictionary.com: 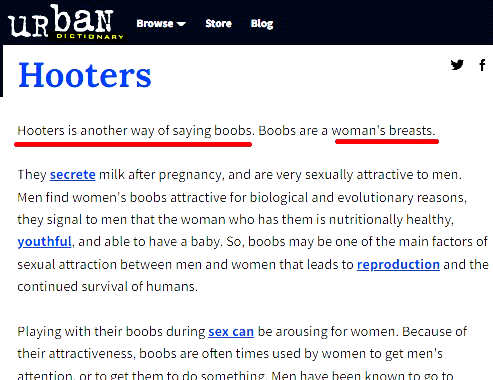 Now, as we did before, let's take a look at the average employee at Hooters.

The typical restaurant "team member" is usually a young man or woman putting his or herself through college, right?

What do you see here? 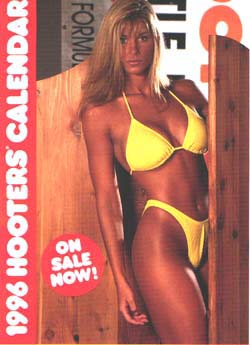 So that explains it, right?

The truth is even weirder.

In between the orange (CIA color revolution) "H" and the "T" you may notice two round circles with dots in the middle, spelling out not just the O's of the word "hooters" but the eyes of the creature itself. H = "Hooters" -- T t = "t" -- "1"

Both have to do with the real meaning of this establishment.

"H" stands for Hooters. Everything about Hooters' logo says "Hooters."

But could these two "O's" mean something else?

This is yet another example of mammary symbolism, and one of the many examples that make it hard to believe the name & logo of the restaurant is mere "coincidence." 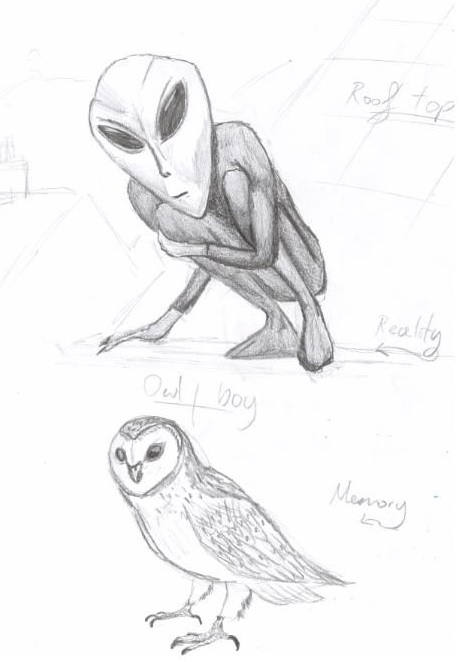 Mammary symbolism is so pervasive, it's a little hard to believe.


Breastfeeding a baby is an unselfish act.

It's done for the safety and health of the child.

Often it's undertaken a last resort to feed a child. Giving a child one's own breast is a show of empathy.

But there's something that connects breastfeeding & breasts with metaphysics beyond the symbolism.

Breastfeeding is often done in a non-procreative manner, as way of passing on the gift of life, not to mention the cultural significance of feeding as sustenance. 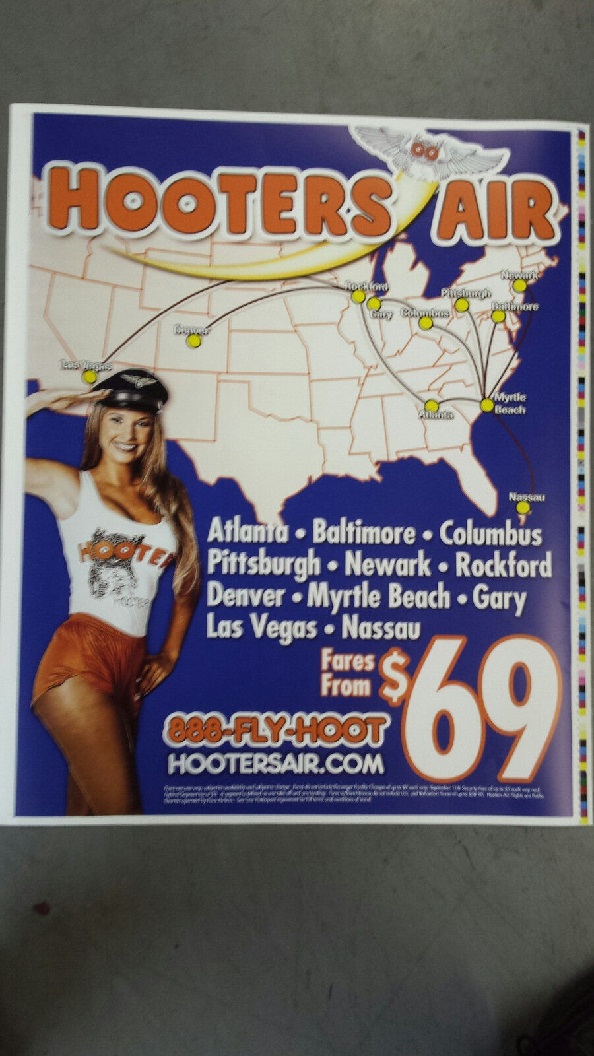 It goes deeper: according to wikipedia.org, Hooters is credited as the first "breastaurant," having operated since 1983. "Other companies soon adopted the format."

According to food industry research firm Technomic, the top three "breastaurant" chains in the United States after Hooters each had sales growth of 30% or more in 2011.

The company has been accused of "symbolism" in its logo and branding, which "some believe reference to the Illuminati's use of the owl as a symbol." The company has also been accused of using "Masonic" symbols in the design of its restaurants, with Will Carto writing that the layout of the tables and chairs in Hooters' original location was based on the layout of a Masonic lodge.

Hooters has denied any link to conspiracy or Freemasonry, and says that its logo is simply meant to represent the company's owl-themed name. 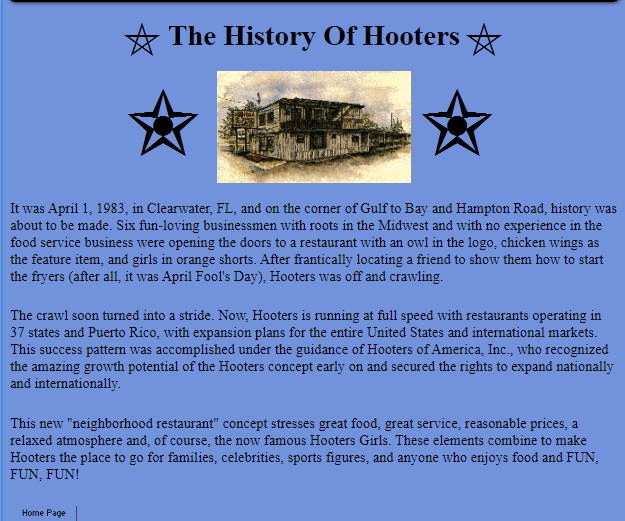 Remember the photo above of the servers working at a "Twin Peaks" restaurant? Let's see what Hooters' current "team members" look like: 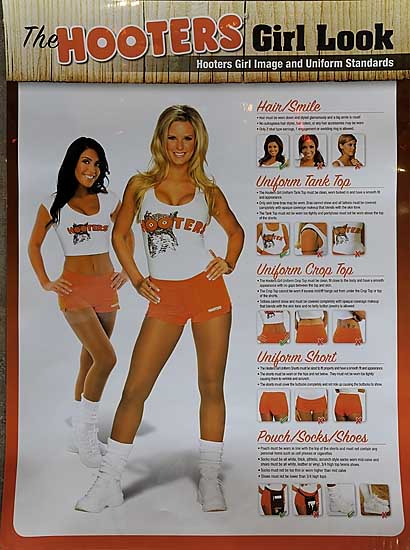 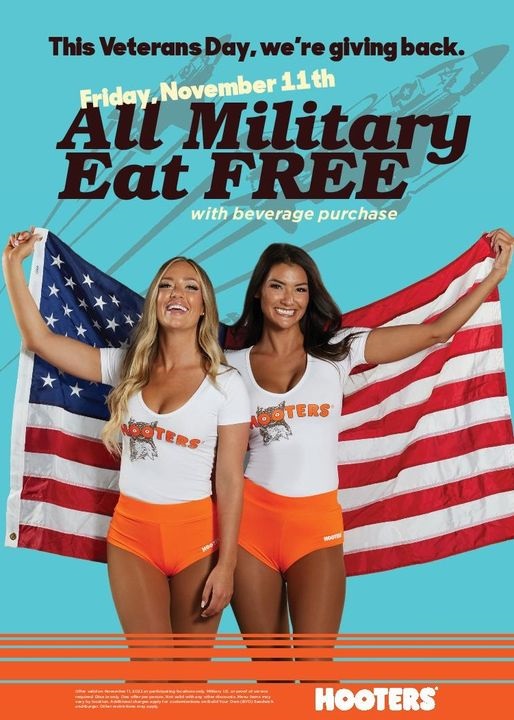 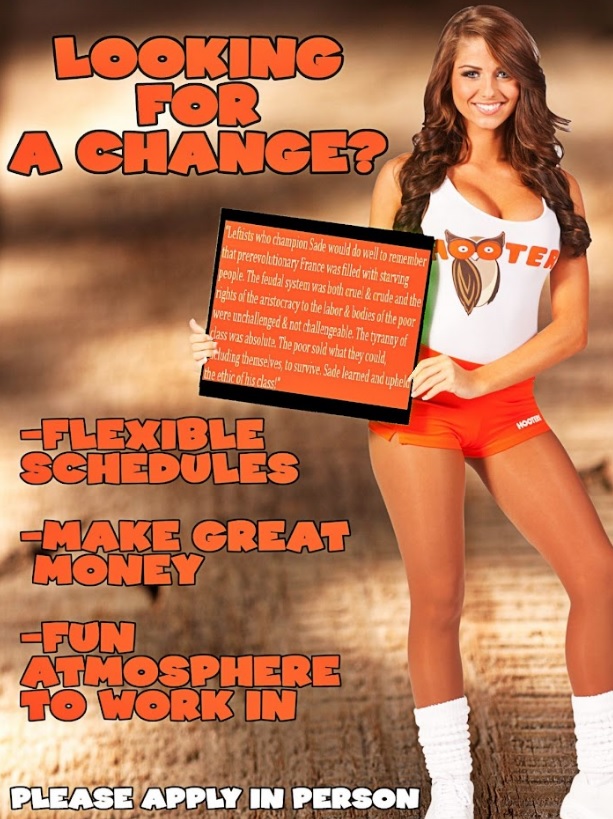 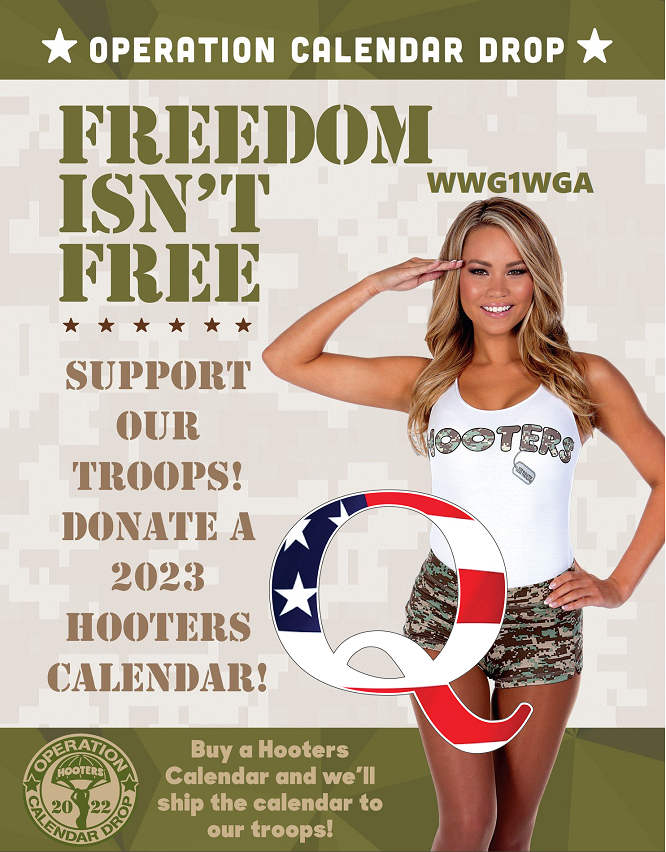 Okay, so maybe the logo, physical spaces & staff reflect this hidden message - surely the food is free of occult influence?

That’s a no again.

The restaurant's menu includes a number of references that evoke the brand's esoteric, subtextual lingo. For instance, 'All-Seasoned Wings' could be a reference to the all-seeing eye, a symbol of the Illuminati.

The 'Hooters Nachos Supreme' is said to be a reference to secret societies such as the Herman Group, as the title 'supreme' is associated with these organizations.

Owls are known to be associated with wisdom and knowledge, but often with death and darkness. This dual nature makes them the perfect symbol for a company in the business of selling sex & objectifying women while practicing cannibalism & human sacrifice. Orange is the color of the setting sun, the color of death, the color of milky cheese, and it is also the color of fire. This again symbolizes the dual nature of the Hooters brand; on the one hand, it is a place where people can go to have a good time, to be given life at the teat, but on the other hand, it is a place where people can go to objectify & degrade women. The use of these symbols & colors is highly suggestive of some sort of hidden agenda on the part of the Hooters company.

Whether or not this agenda is actually sinister is up for debate.

However, the fact that these symbols are so prevalent in Hooters restaurants is certainly cause for concern.

The lack of scrutiny and transparency, as well as the lack of information on restaurant brands & labels, is an accident waiting to happen and globally legislators need to wake up and "smell the coffee" that regulators need to review the situation.

Kathy Kasten raised this question over twenty years ago, on a private listserv:

Once again, a breastaurant is a restaurant that requires female waiting staff to be skimpily-dressed. The term dates from the early 1990s, after restaurant chain Hooters opened in the United States.


These restaurants often use a sexual double-entendre brand name and may also have appropriate themes, both in decoration and menu. The restaurants may offer perks for customers, such as alcoholic drinks and flirty servers. 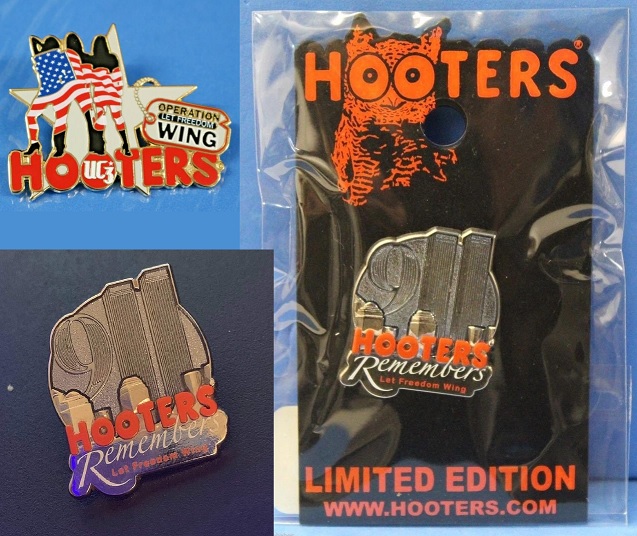 Tristano confirms that the servers drive the concepts. "The increased service is absolutely the core, not the food," he says. "I suspect a lot of this segment's success has to do with server training and hiring the approved people."

Though this segment of the market is definitely heating up, none of the concepts thinks they are in danger of saturation, especially since their numbers are fairly small and they're not targeting the same geographical areas. Instead, they worry about competition from sports-oriented concepts like Buffalo Wild Wings. In fact, DeWitt says today's market is similar to the one from which Hooters emerged in 1983.

"It seems like Hooters had the whole segment to itself back then, but if you do the research, they had a raft of competitors that popped up–often with really crass names like Mugs 'N Jugs–before Hooters emerged as a clear national leader," he says.


In October 2012, Bikinis Sports Bar & Grill successfully registered the term "breastaurant" as a trademark with the United States Patent and Trademark Office; but as of May 24, 2019, the trademark lapsed under section 8, "Continued use not filed within Grace Period". 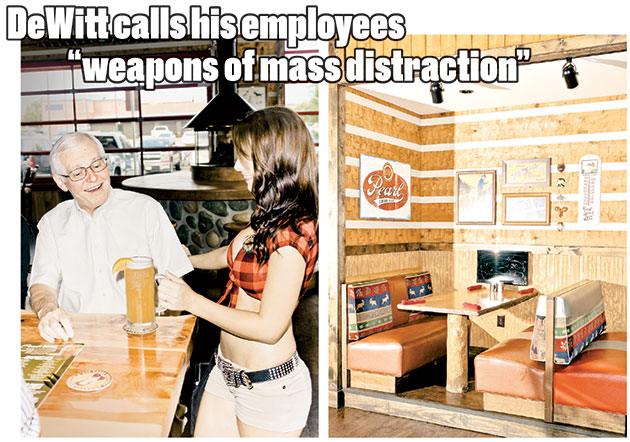 (He’s a fan of the David Lynch television series from the early 1990s but says it had nothing to do with the name of his restaurant.)

Yikes! Take Me Back To The Main Page!!